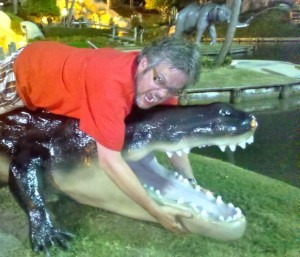 So this is where I am supposed to write some eloquent statement in the third person about who I am? Yeah, let’s see how well that works out. Parts of this were written several years ago. I am not completely removing them for now… just adding to and commenting.

Blair J. Andress is a sojourner, a traveler if you will. He realizes that this world is not his home, but he is enjoying his stay thus far.

How to describe him? Well, he is the husband of a wonderful woman who deserves a better man, and the father of two beautiful little girls who don’t realize how they make him smile each and every day. A friend to many and friendly to many more, Blair has described himself as a paragon of gregariousness. He has taught hundreds of students in his years as a public school teacher, and he prays that at least some of them remember him fondly. In January of 2010, he was demoted out of the high school English classroom and called to be a middle school assistant principal. With a total of nine years in ministry of one form or another (bivocational and full-time), Blair has served several churches in a variety of capacities.

As a sojourner, Blair is confident of the ultimate destination but rather uncertain of the stops along the way. Heck, he is not even all that sure where he has been much less where all he may be going. One thing is for sure… he is determined to enjoy the journey, and he would love to share it with you. After all, traveling together is oh-so-much more fun than traveling alone.

File the following under T.M.I. -

hair:
Too darn much of it. It is always subject to change, but at the moment, it is long-ish and growing. The roots need work… he has promised to go bald gracefully if that should ever happen, but he never mentioned anything about accepting grey. Yeah, not so much any more. The administrative position in a rural setting mandates a certain level of professionalism that a male with highlights in his pony tail can’t pull off. The hair is short, cut every three weeks… and going grey. Rapidly.

eyes:
Blue. And often bloodshot from late nights paired with early morning… I simply must learn to put down the books / iPod (watching shows on the little screen doesn’t tend to disturb his bride as much as watching them on the TV). Forget the little screen on an iPod. The technology that the late Steve Jobs used to impress back when this was written has been replaced. He now reads books… on his iPad. He watches TV shows and movies on his iPad occasionally, but he prefers his big screen iMac. His bride has learned to go to sleep with the glow of the screen and the sound gently muted by the droning of a fan.

likes:
Star Trek (the various newer series, but not so much the original) Not so much anymore. He has watched them all.
Lost Off the air. The series finale was emotionally satisfying but intellectually lacking.
Heroes Got stupid. Replace these shows with Big Bang Theory, Castle, Dr. Who, and assorted others.
reading
laughter
hanging out with friends
spending time with my family
cool tattoos I have several more since this was posted.

dislikes:
lies
apathy
waking up right before my alarm clock goes off… and not being able to go back to sleep

dream community of faith:
one that is committed to authentic, transparent relationships… where people can be themselves without fear of judgement, knowing that those in the community are committed not only to loving them where they are, but are also committed to encouraging them to greater depths in their spiritual journeys

personal vision statement:
I long to be used to introduce not-yet believers to Jesus, to challenge those who already seek after God to follow Him more closely in the ways of Jesus as we strive to live together in authentic community for the betterment of the world.