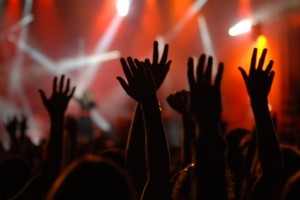 When I was in sixth grade, Nicky Cruz came to town to preach a revival sponsored by several area churches. (I will never forget what grade I was in because several of the girls in my class that took turns being the objects of my unrequited crushes ended up falling in love with Nicky Cruz. After reading his autobiography Run Baby, Run, they decided he was the perfect man: he was exotic, he spoke with an accent, he had been a tough guy but now was telling people about Jesus. He was the bad boy that their mothers would approve of.)

First Baptist Church, where my family attended weekly, sponsored the event along with other churches that apparently worshipped a bit differently than we did. I remember seeing Ms. Gibson there. She was a kindergarten teacher at my elementary school, and she was mean. When we gathered in the auditorium before school and waited for the bell to ring, she always made us sit down and be quiet. She wouldn’t even let us get up to go to the bathroom, so there was no sense in even asking her if you could go sit next to a friend whose bus arrived later than yours. Her room was located next to the cafeteria, and I remember her yelling at classes on their way to lunch who made the near-fatal mistake of disturbing Ms. Gibson’s kindergartners. Ms. Gibson didn’t attend First Baptist… I realized quickly that she must attend one of those weird churches. Maybe not one with snakes, but definitely one different from First Baptist.

Before Nicky Cruz came out to preach, we sang several songs. Some of them I knew, some of them I didn’t. At my church, we sang with hymnals. If you were super-spiritual, you might close the hymnal on the last verse and sing it with your eyes shut. Apparently, this makes it look like you are praying the words, and that might impress God. Ms. Gibson must have gone to a different kind of church because there is no way you can sing with your hands up in the air like that. How can you see your hymnal if you are holding it above your head?

I remember staring at her, dumbfounded. I think I was surprised she was there, and I was definitely surprised by her behavior. The only emotion I had ever seen her display was anger… anger at a sixth grader who was too loud outside of her room, anger at a group of fifth grade boys who tried to get up and go sit near a group of fifth grade girls. Yet, here she was… the meanest kindergarten teacher I had ever encountered… lifting her hands and singing with reckless abandon. The look on her face as she sang was one of absolute joy.

For several years, I didn’t really understand what Ms. Gibson had experienced those nights before Nicky Cruz spoke. Then, in high school, I attended a student ministry that encouraged worship. The youth minister taught us that there was freedom in worship… freedom to sing out loud, to stand, to sit, to lift one’s hands, and a freedom not to. Under his leadership, I began to understand that worship doesn’t always look the same.

I began to understand that sometimes, one lifts one’s hand’s out of complete surrender. Other times, doing so may be a gesture of absolute praise. I remember being taught that when little children desire closeness with their father, they will often reach up with open arms, waiting to be held. Is it really so different with our Heavenly Father? Perhaps the most surprising idea was that raising my hands in worship blesses God. Psalm 134 reads, “Come, bless God, all you servants of God…. Lift your praising hands to the Holy Place, and bless God.”

I didn’t lift my hands because I am super-spiritual. I am anything but that. (Those who know me best will tell you that I love Jesus, but I cuss a little.) I stood with arms outstretched because I understand Ms. Gibson a little better these days. I stood with hands lifted high, occasionally singing with abandon, because God is worthy. I have seen others get excited at football games and cheer with fervor, I have seen people on the front rows of concerts waving their arms as their favorite bands sang. Why do some find it comfortable in those settings but not in church?

The sixth grade version of me was puzzled by Ms. Gibson. The adult version of me wishes I could thank her. My sister this morning led us to worship with abandon. Years ago, Ms. Gibson showed me what that looked like.